We have two cats, affectionately know as the “Blues Brothers” for their blue eyes.  They are constantly together – playing and sleeping.  Here are two shots of them, first as kittens and as they are now. 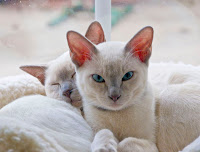 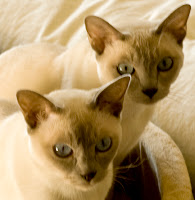 I’ve recently learned something about cat behaviors that I never knew.  One of the cats had to have some minor surgery.  He was away for most of one day and when he returned it was as if his brother had never laid eyes on him.   The “hissy fits” and spitting, etc., have gone on for more than 48 hours now, although I think it’s getting better.   This afternoon they have consented to lie on the same bed about 3 feet apart.  Hopefully tomorrow they will be curled up together again.
Posted in Blog