I spent several weeks in Santa Fe, NM this spring. The weather was fascinating and I enjoyed watching the sky and the clouds and the storms that come up in the afternoon and evening. It’s fascinating to see the changes in the clouds – first in one area and then another, interrupted by periods of sunshine. Mostly, none of this lasts very long before changing to something else. Our RV was parked atop a hill with a 360 degree view: mountains in two directions with incredible views of storms rolling in. Most of the storms seemed to hang over the mountains, but sometimes it rains over a larger area in the afternoon – with thunder and lightning, too. It was windy during our stay. Spring is generally windy in the Santa Fe area, but it’s usually in March that the winds blow and blow. This year the winds have continued for weeks beyond the normal period.

As always, when I’m in Santa Fe, I spent quite a while wandering through a couple of the “artsy” areas. The older area is known as “Canyon Road”. Canyon Road runs for a considerable distance and much of the lower part of the street is lined with shops and galleries. The newer art site is outside of town – a refurbished railroad yard area known as Railroad Square. Although Railroad Square has been in existence for a long time with a variety of small galleries and shops, it’s now a mixed development of stores, galleries, and apartments.

This time I found the studio of a fantastic photographer named David Brookover. His work is absolutely incredible. Much of Brookover’s work is reminiscent of Ansel Adams large scale B&W photos. I dream of having a large copy of his photo of the White House in Canyon des Chelly. 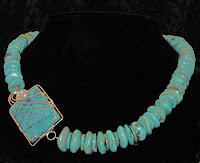 We did a little exploring outside of Santa Fe, too. North and slightly west of Santa Fe is Abiquiu. We had not been in this part of New Mexico before and we were blown away by the scenery. You can literally see Georgia O’Keeffe’s paintings as you drive along from slightly south of Abiquiu heading northward. We were headed for the Ghost Ranch where Georgia O’Keeffe visited and later lived. It’s really amazing to see the changes in scenery/geology in this distance (around 100 miles). The scenery is totally unlike the area around Santa Fe, but very dramatic and compelling in its own way. It was fascinating to see the changes in relatively narrowly defined areas – distinct geography and geology, all from the bottom of an ancient sea.

We made a second trip to Ghost Ranch with camera and lenses. The anthropology and paleontology museums at Ghost Ranch are fascinating – ancient peoples and very early very small dinosaurs. A few miles make all the difference in the scenery. Shortly after we left Abiquiui and headed north, we came to Echo Amphitheater, an awesome natural amphitheater. Not far beyond Echo, we found ourselves in an area where it looked as if somebody had emptied out their leftover cement on top of every mesa and peak. This region lasted for a relatively short distance and from this point northward, northern New Mexico begins to look more and more like southern Colorado with traditional mountain/valley scenery and lot of pines.