Skip to content
Gems are described by chemical composition, crystal structure, and where they are found.  Gems are further classified based on properties like refractive index (how they bend light), luster, hardness, etc.  Perfection in appearance is of primary importance in the finished gemstone.  A gemstone can be a mineral, a rock, or any petrified material that’s suitable for use in jewelry. Diamonds, rubies, emeralds, sapphires, and amethysts are generally the most valuable.
Many gemstones have long and complex histories.   Some specific gems have a lot of lore attached to them.    The gems listed here are some of my all time favorites.
Agate – a form of chalcedony that occurs in many colors with a variety of inclusions.  Some people believe that wearing agate increases perceptiveness and also brings good luck, inspiration and strength to the wearer.
Alexandrite – a form of chrysoberyl which exhibits a dramatic color change (red to green) depending on the lighting.
Amber – a fossilized resin that occurs in a range of colors.  Amber is thought to dispel negative energies and to encourage a positive attitude.  It was used for medicinal purposes at one time. 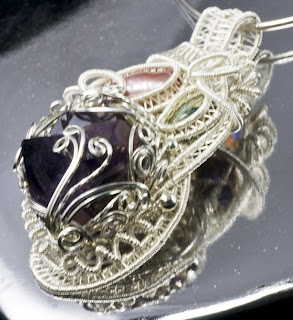 Amethyst – a form of quartz that ranges in color from light to deep purple.  The color is due to the presence of iron and aluminum impurities    According to gemstone lore, some people believe that amethyst provides protection to the wearer (amulets of amethyst were worn into battle in Medieval times), brings calmness, and might even ward off drunkenness.
Aquamarine – generally a delicate light blue color, aquamarine can occur in more intense shades.   Chemically, aquamarine is a beryl.   The blue color of aquamarine is due to traces of iron.  At one time it was worn an amulet thought to promote safety when traveling over water
Aventurine – quartz family with inclusions that affect the color (chromium produces green to blue colors while iron produces orange to brown shades.  Aventurine is considered to encourage motivation, creativity, healing, hope, and to bring abundance.
Azurite – an intensely blue gemstone that frequently occurs with malachite.  The blue color is due to the presence of copper in the stone’s chemistry.   Azurite has been used as a blue pigment since ancient times.   The ancient Egyptians used it as an eye makeup.     Azurite has long been used as a healing stone and it is reputed to clear the mind and to enhance receptivity.
Beryl – this gem occurs in many different colors – the intense green form is known as Emerald, while the lighter blue form is Aquamarine.
Bloodstone – bloodstone is a deep green chalcedony with red spots.  It’s also called heliotrope. Bloodstone is thought to encourage healing, improve decision making.
Chalcedony – quartz; includes both banded “agates” and onyx depending on the structure
Carnelian – Carnelian is a translucent orange/red to red/brown variety of chalcedony. The red tints are caused by iron oxide impurities.  Carnelian is recommended to improve mental clarity and may assist people overcoming anger and maintaining self-control.   It was highly valued for ornamentation by the ancient Egyptians, Greeks, and Romans   It was reputedly used by the Egyptian goddess Isis to protect the dead on their journey through the afterlife.   Carnelian was thought to provide increased energy.  Ancient Egyptians set carnelian with turquoise and lapis lazuli for enhanced power.
Chrysoberyl – once widely popular for jewelry, chrysoberyl is now relatively rare. Chrysoberlyl has hard greenish yellow crystals.  Alexandrite is one variety that exhibits color change.
Chryoprase – an apple-green form of chalcedony
Cinnabar – mercury sulphide ore with distinct red to brick red color.
Coral – variety of colors depending on variety and frequently dyed.  Coral is thought to increase awareness and objectivity.  Provides calmness, quiets emotions
Diamond – made of pure carbon, diamond is the hardest, densest, and rarest gem.  Diamond is thought to encourage hope, promote healing, and impart protection.
Emerald – a beryl stone with traces of chromium and sometimes vanadium providing the intense green coloration, emeralds are extremely popular for jewelry.  Emeralds have been known since ancient times and were mined as early as 2000 BC.
Fluorite – this gem comes in a variety of colors from purple to pink and green and many shades in between.   It has a glassy luster and it fluoresces or glows blue under UV light.    Fluorite is thought to increase intuition, to foster harmony and balance in relationships,  and may attract abundance and wealth. 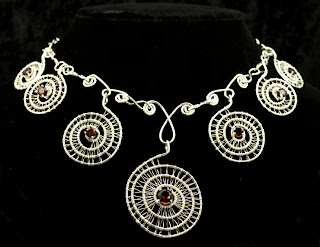 Garnet – there are several different forms of garnet, but they are all related.  The most common colors are oranges, reds, and greens.  Garnet is thought to encourage friendship and fellowship
Posted in Blog, Gemstone Jewelry, gemstone lore, gemstones